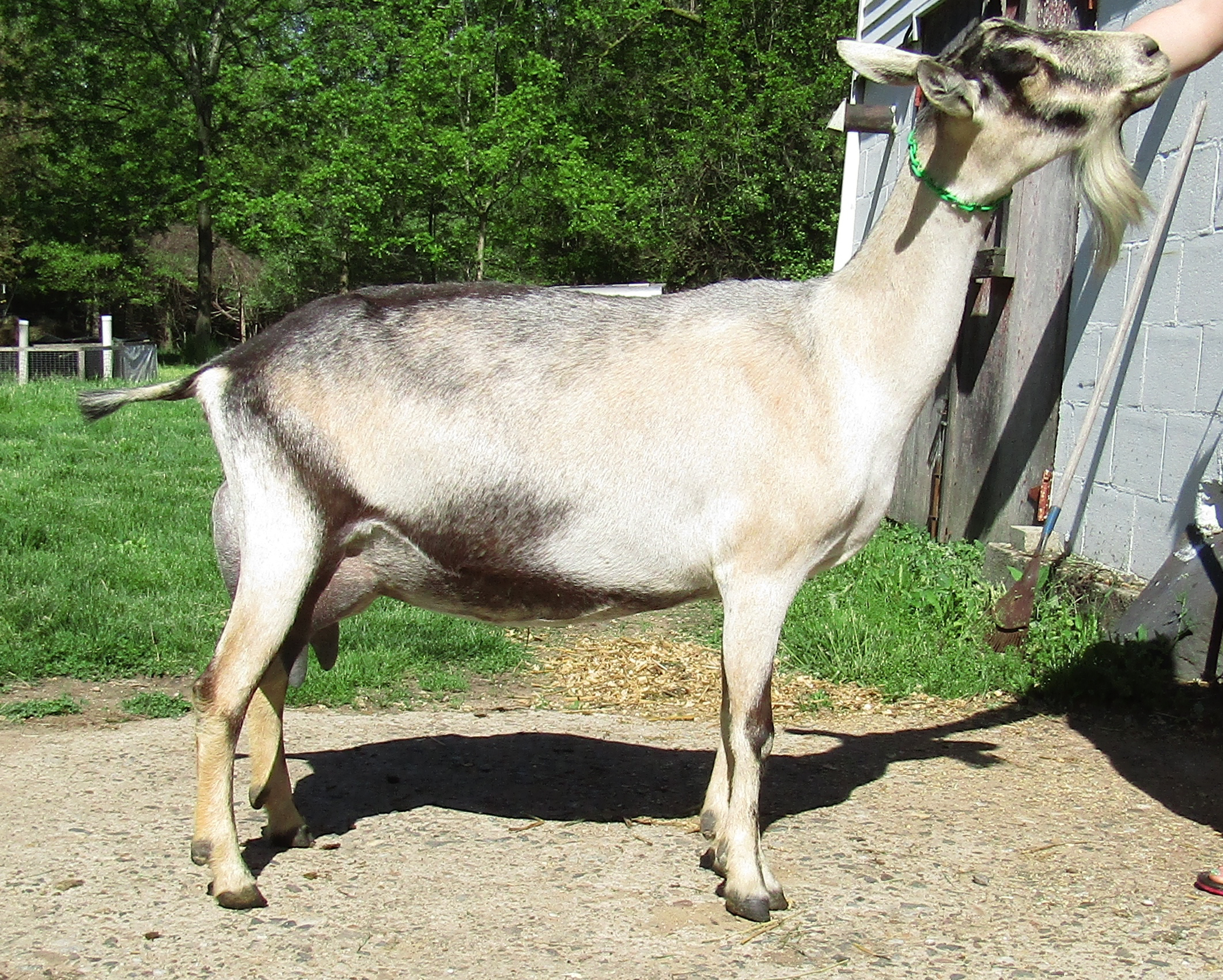 2015 – She managed to injure her left fore foot/hoof at some point during her dry year – evidenced by odd hoof growth on one claw and often ‘holding’ that leg a bit differently . I’m just now (Aug 2016) starting to be able to trim it back to a normal shape, but the leg doesn’t ‘match’ the other.

2017 – this is finally her year! She is producing extremely well this year. I knew she had potential, but her situation has never before allowed her to live up to it. She has only been on test as a FF, then took a year off, then had a single in 2016 which resulted in just an average lactation. I knew she could do better. This set of triplets in 2017 finally set her up for success. Looking forward to this year for her. Update Fall 2017: She has appraised EX90!

2018– Just when I thought she did great in 2017, she gives quads in 2018 and hits some very impressive numbers on her first two tests – the 2nd test day a whopping 15.3#! Amazing what maturity and a large number of kids can do for milk production! 🙂 UPDATE: She has achieved her permanent score of EX91!

2019 – The herd has moved to the amazing care at QMF farm, and a few kinks had to be worked out in the new dynamic herd with many more does than ever previous. The does freshened very strong but shortly thereafter,  herdwide decreases in production and body condition were seen, which we attributed was due to poor hay quality having only a first cut hay available. We had the quantity, but not the quality needed for peak production. Coupled with a very wet spring and summer, ability to cut new hay to make up the deficit was nearly impossible for a long time. We scrambled to correct and began chaffhaye and alfalfa pellets but the insult came at a critical point in lactation and does across the board from both herds just didn’t bounce back.  It’s all a learning curve plus a large factor of the growing seasons 2018-2019  – together the two herds are hoping positive changes were made and really hopeful for better luck in hay for 2020! We knew there would be growing pains, so this is just a hiccup. 🙂 “Syd” herself has continued as a good matriarch of the herd otherwise, maintaining her EX status with 06-06 VEVE 90. She is also confirmed bred during our Lap AI event to SG Sodium Oaks SP Wahoo +*B, who should bring some old style winning genetics for both production and show. Very excited to see what we get!

2021 – The ole lady has moved with the rest of the herd to the new homestead in Six Lakes, MI! She was the very first doe to kid at the new place, being the latest one due in May and her twins were born unassisted several hours earlier than they should have been (induced labor). The whole herd was in an uproar due to this travesty! 😉 All were gentle to the wet new kiddos but decided it was battle royale among the adults. Per her usual, Syd came into milk steadily and is still my favorite doe to hand milk. So nice to have a familiar, steady creature to work with who demands attention occasionally but mostly just comes and goes without fuss.