I bought “JOS” semen for dirt cheap through semen clearing house, and I cannot wrap my head around how inexpensive it was. Perhaps because he’s not a ‘hot’ buck for the show world I suppose, but his pedigree screams production.

The D/AV above was calculated for just 10 does with an average lactation of 1.4 lactations, so very ‘young’ animals make up the numbers for the average above.

JOS’s sire is the infamous SG Sodium Oaks Sasin ++*B, the most influential and most proven alpine buck of all time. 23 SGCH offspring, 37 SG offspring, 21 GCH offspring, and 4 CH offspring.

His dam, Bethel Rad Joy Jewel 6*M  was a top 10 doe producing as near as makes no difference to 5,000lbs in 305d as a 4 year old. Also interestingly, she milked through to 678 days in milk to produce an additional 3790lbs, for a total of 8,750lbs. That shows tremendous staying power for that lactation. In addition, if you divide her total pounds produced in her lifetime and divide by total days in milk, you get a very impressive 11.8# PER DAY AVERAGE over her lactating lifetime. That is far more than many goats PEAK at, let alone have as an average! 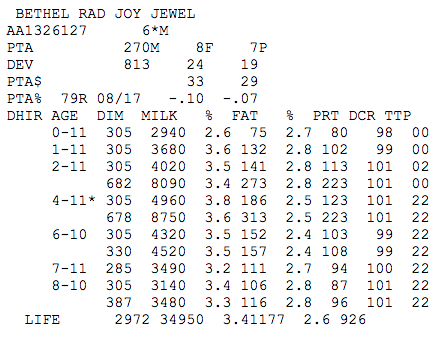 Jewel’s sire is Mamm-key MS Radar, who boasts a pedigree of some of Mamm-Key’s best producers. Rabbit has 4 top 10 lactations (all of her lactations on test), all over 4,000lbs with one over 5,000lb. Her dam has one lactation well over 5,000lbs and one incomplete lactation over 3800lbs. On the top of Radar’s pedigree is Spike whose daughters average 2835lbs. His sire is GCH Whacker *ELITE* whose daughters average a very impressive 3266lbs.

Jewel’s dam (Bethel Huck Hope Joy 5*M) is a productive doe with several lactations over 3,000lbs. She is sired by a Coach Farms buck, Huckleberry. While Coach does not use ADGA performance programs or even register all their animals, they are known for being hands down the most productive dairy goats  – probably of any breed.